About the TiDB Source Code

The target audience of this document is the contributors in the TiDB community. The document aims to help them understand the TiDB project. It covers the system architecture, the code structure, and the execution process.

As is shown in the architecture diagram, the TiDB Server is between the Load Balancer (or Application) and the storage engine layer at the bottom. Within the TiDB server, there are three layers:

Overview of the code structure

See the following list for all the packages and their main functions:

The protocol layer is the interface to interact with the applications. Currently, TiDB supports the MySQL protocol only. All the related codes are in the server package.

The main function of the protocol layer is to manage the client connections, parse the MySQL commands, and return the execution results. This layer is implemented according to the MySQL protocol, see MySQL Client/Server Protocol on the MySQL website for further information.

For a single connection, the entry point method is the dispatch of the clientConn class, where the protocol is parsed and different processing functions are called. 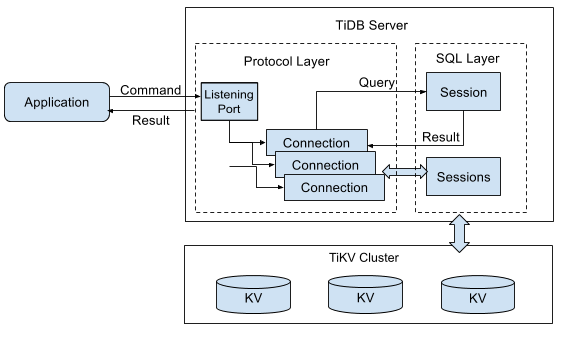 The following sections are about how the TiDB SQL layer works and how a SQL statement changes from a piece of text to an execution result set. The introduction is focused on the SQL layer only and the Key-Value layer is not covered.

Generally speaking, a SQL statement goes through the following process:

The following diagram shows how TiDB processes a SQL statement: 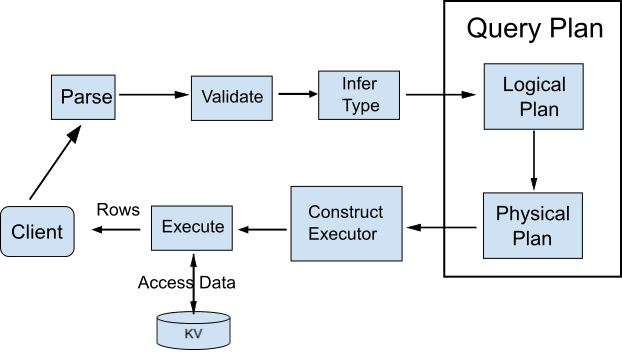 The optimizer is the core of the database and it determines how a statement is executed. The optimizer to a database is what a commander-in-chief to an army. As we all know, the commander-in-chief’s failure is the disaster of the entire army. The same applies to the optimizer and database. For the same statement, the running time varies significantly using different query plans. The research on the optimization is an active academic field. There is no limit on optimization and you can never overestimate the efforts and importance it takes.

There are following types of optimization methods:

The codes for the TiDB optimizer is included in the plan package. The package is mainly to transform an AST to a query plan tree. The nodes of the tree are different types of logical operator and physical operator. All sorts of optimization towards the query plan are all based on the methods of calling the root node, optimizing all the related nodes recursively, then transforming and trimming each node on the tree.

The most important interfaces are included in the plan.go file, including:

Starting from the root node, each node on the logical query plan tree is called recursively and transformed from a logical operator to a physical operator until a better query path is found based on the query cost of each node.

Although the optimizer is the core component, an excellent database cannot make it without an excellent executor. The executor is to a database is what brilliant soldiers to an army. No matter how good the commander-in-chief is, without good soldiers, the army can’t win in the battlefield.

Compared with MySQL, TiDB has two advantages: one is the massively parallel processing (MPP) framework which enables computing on multiple TiKV and TiDB nodes to improve the efficiency and speed as much as possible; the other one is that a single operator can compute parallel as much as possible such as the operators like Join/ Union. TiDB starts several threads at the same time. The entire data computing process makes a pipeline and cut the waiting time of each operator as much as possible. This is why TiDB is better than MySQL when processing large amounts of data.

The most important interface is in the executor.go file:

The physical query plan tree from the optimizer is transformed to an executor. Each node on the tree will implement the interface. The executors pass data through the Next interface. Take “select c1 from t where c2 > 10;” as an example, the final executor are the three executors: Projection->Filter->TableScan. The Projection on the top layer continuously calls the Next interface until the TableScan layer at the bottom and access data from the table.

As a distributed database, there is a distributed computing framework inside TiDB. A running query is distributed and parallelized as much as possible. The entry point of the framework is in the distsql package. The following API and two interfaces are the most important part:

Select() is the most important interface of DistSQL. There are two parameters: 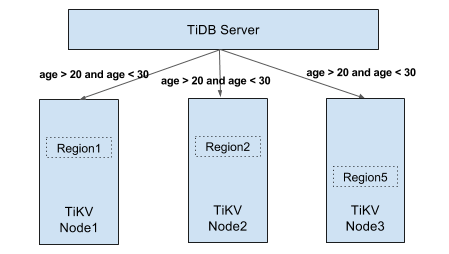 The distributed executor is mainly about distributing tasks and collecting results. The Select interface returns a data structure, which is called SelectResult. The structure can be considered to be an iterator. Because there are many region servers at the bottom layer, the results returned from each node is PartialResult. On top of these results is an encapsulated SelectResult which is an iterator of PartialResult. The next PartialResult can be obtained by using the next method.

The internal implementation of the SelectResult can be considered to be a pipeline. TiDB can send requests to each region server concurrently and return the results to the upper layer. The order is determined by the order of the returned results from the bottom layers and the KeepOrder parameter of the Select interface.

See the related code in the distsql package and the store/tikv/coprocessor.go file.