TiDB Binlog is a tool used to collect the logical changes made to a TiDB cluster and provide incremental backup and replication.

TiDB Binlog is similar in functionality to MySQL primary-secondary replication, which relies on persisting a logical set of changes into a binary log. The main difference is that since TiDB is a distributed database, the binlog generated by each TiDB instance needs to be merged and sorted according to the time of the transaction commit before being consumed downstream.

You can use the TiDB Binlog to asynchronously replicate between TiDB clusters across a WAN, or to subscribe to TiDB data changes and feed other systems (such as an external cache or fulltext index).

A common real-life use case is using TiDB Binlog to replicate data from one TiDB cluster in one data center (DC) to another TiDB cluster in a different data center, both in the same city or close geographical proximity (e.g. an Availability Zone). This scenario guarantees cross-DC availability of your data with high performance since the physical distance between the two DCs is short.

The first version of TiDB Binlog was released more than two years ago. Among the multiple versions of TiDB Binlog, the Kafka-based version was widely used. The architecture was as follows:

The architecture of the Kafka version of TiDB Binlog

The Kafka version of TiDB Binlog consisted of the following two components:

The Kafka architecture worked as follows:

This Kafka-based version of TiDB Binlog had a few issues:

To resolve these issues, we refactored TiDB Binlog into the following architecture:

The architecture of the latest (cluster) version of TiDB Binlog

This version of TiDB Binlog no longer uses Kafka to store the binlog. Although it still keeps both the Pump and Drainer components, the functionality has been adjusted as follows:

This version has the following advantages:

Since the biggest characteristic of this version of TiDB Binlog is that multiple Pump instances constitute a cluster, we call this version: the cluster version.

Now, I’ll introduce the implementation principles of the cluster version of TiDB Binlog.

The binlog structure is defined as below:

For more details about binlog and the data structure definition, see binlog.proto.

The TiDB Binlog format is row-based logging (RBL), which stores the change of each row of data. The data change is recorded in the prewrite_value field, and the data in this field mainly consists of serialized data arrays with the following TableMutation structure:

I’ll use an example to explain how binlog stores data changes.

Assume that the table schema is:

Then the following TableMutation data is generated:

From the above results, we can see that the order of data modification types saved in sequence is right the execution order of SQL statements. Detailed modification data is saved to the corresponding variable.

Before replicating the binlog data to the downstream, Drainer needs to convert the above data back into SQL statements.

When writing binlog, TiDB sends a writing data request to TiKV and a Prewrite binlog record to Pump concurrently. If one of the two requests fails, the transaction will fail. After Prewrite succeeds, TiDB sends a commit message to TiKV , and then asynchronously sends a Commit binlog record to Pump. Since TiDB sends requests to TiKV and Pump in Prewrite phase at the same time, as long as the time that Pump handles the Prewrite binlog request is less than or equal to the time that TiKV executes Prewrite, enabling binlog will not affect the transaction delay.

Pump Client is integrated into TiDB in the form of a package. See Pump Client code.

The methods that Pump Client uses to divide Pump instances are as follows:

Through the above measures, the Pump Client can update the maintained Pump cluster information in time to ensure that the binlog is sent to available Pump instances.

After ensuring that the binlog is sent to available Pump instances, another problem is how to guarantee that Pump Client distributes binlog writing requests evenly to each Pump instance. To solve it, we provide the following three routing strategies currently:

Pump Client uses the WriteBinlog interface in pump.proto to submit writing binlog requests to Pump, and gRPC is used to send these requests.

So we handled this problem in Pump. If one piece of Prewrite binlog cannot find the corresponding Commit binlog within the transaction timeout limit (ten minutes by default), prewrite_key in the binlog data will be used to query in TiKV whether the transaction has been committed. If the commit is successful, TiKV will return the commit_ts of this transaction. Otherwise, Pump will discard this piece of Prewrite binlog.

The binlog metadata provides the file and location of the data store, which can be used to obtain data by reading the specified location of the binlog file. Because binlog data is basically written to the file in order, Pump only needs to read the binlog file sequentially, which ensures that Pump performance will not be affected by frequent file read operations. Finally, Pump transfers the binlog data to Drainer with commit_ts as the sorting criteria. The interface that Drainer requests binlog data from Pump is PullBinlogs in pump.proto, which transfers binlog data in the form of gRPC streaming.

It is worth mentioning that there is a fake binlog mechanism in Pump. Pump periodically (three seconds by default) writes a piece of binlog with empty data to the local storage. Before generating binlog, Pump will get a timestamp from PD as the start_ts and commit_ts of this binlog. This type of binlog is called fake binlog.

Drainer obtains and merges binlog from each Pump instance, parses the binlog and generates SQL statements or data in the specified format, and then synchronizes the data to the downstream. 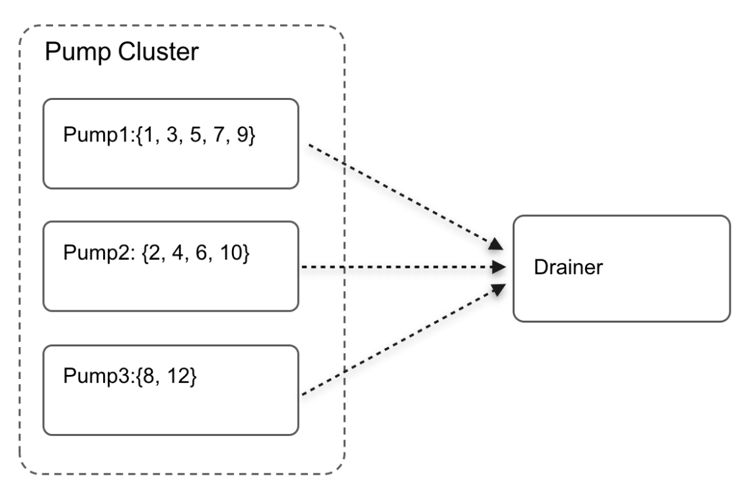 The binlog stored by Pump1 is {1, 3, 5, 7, 9}, and the binlog stored by Pump2 is {2, 4, 6, 10}. Drainer gets the binlog from the two Pump instances. Assuming that the binlog {1, 2, 3, 4, 5, 6, 7} have been read so far and the position of the processed binlog is 7, at this time, Pump3 joins the cluster and reports its online information to PD. It takes some time for Dainer to obtain the information from PD that Pump3 goes online. Let’s assume that Pump3 directly provides the writing binlog service without notifying Drainer and writes the binlog {8, 12}. During this period, Drainer continues to read the binlog of Pump1 and Pump2 and doesn’t recognize Pump3 until it has read the binlog {9}. Then Drainer adds Pump3 to the merging and sorting list. At this time, the binlog {8} of Pump3 is lost. To avoid this issue, Pump3 needs to notify Drainer that it goes online. After receiving the notification, Drainer will add Pump3 to the merging and sorting list and returns a successful feedback to Pump3, and only then can Pump3 provide the writing binlog service.

Drainer merges and sorts the binlog in the way described as above and advances the position of synchronization. However, the following issue might be encountered: Drainer cannot continue to merge and sort the binlog when a certain Pump receives no binlog data during a period of time for some special reasons. This is just like we walk with two legs but one of them cannot move, so you cannot keep moving forward. To avoid this issue, we introduce the fake binlog mechanism mentioned above. Pump generates a fake binlog every specified time. Even if some Pump instances receives no binlog data, we can still ensure that the binlog is merged and sorted normally.

To avoid this issue, Drainer introduces the conflict detection mechanism. If the detection shows the two SQL statements conflict (modifying the same row of data), the subsequent SQL statement will not be sent to the goroutine, but a job of the Flush type is generated and sent to all goroutines. Each goroutine will execute the cached SQL statement right away once it encounters a Flush job. Then this conflicting SQL statement is sent to the corresponding goroutine.

The following example illustrates the mechanism of conflict detection:

The SQL statements are shown above and id is the primary key of the table. The conflict detection mechanism in Drainer works as follows to guarantee data consistency:

As an important tool in the TiDB ecosystem, TiDB Binlog is being used more and more often by our customers. It’s a key focus of our development team and we’ll continue to improve its reliability, stability, and usability.