Kubernetes (K8s) is an open-source container orchestration system that automates application deployment, scaling, and management. It’s the operating system of the cloud-native world. Any defects in K8s or the operation system might put the application in the upper layer at risk.

As the EE (Efficiency Engineering) team at PingCAP, we optimize our office infrastructure and improve office automation and teamwork effectiveness. When we tested TiDB Operator (which creates and manages TiDB clusters) in K8s, we found two Linux kernel bugs. These bugs have plagued our PingCAP K8s environment for quite a while and aren’t thoroughly fixed in the K8s community as a whole.

After extensive investigation and diagnosis, we’ve identified ways to handle these bugs. In this post, I’ll share with you how we tackled these problems. However, as useful as these solutions are, we consider them workarounds, and we believe that more elegant solutions are possible. The goal of this post is to inspire the K8s community, RHEL, and CentOS so that they can help fix these bugs thoroughly in the near future.

Related issues in the community:

The only negative indicator was the message, “SLUB: Unable to allocate memory on node -1” in the output of the dmesg command.

We used funcslower in perf-tools to trace kernel functions that were executed slowly and adjusted the threshold value of the hung_task_timeout_secs kernel parameter. When we performed the write operations in TiKV, we found the following kernel path information: 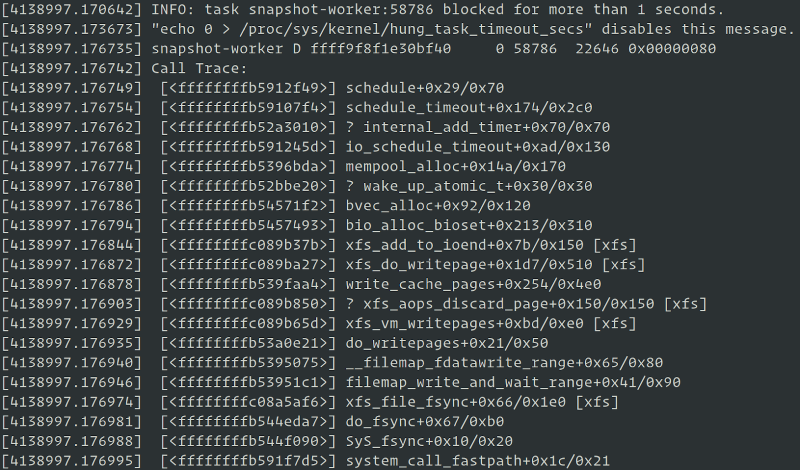 Based on the information above, we could see that the I/O jitter was related to the file system executing writepage. At the same time, before and after the performance jitter was captured, the dmesg output contained a large amount of information about “SLUB: Unable to allocate memory on node -1”. This message occurred even when the node had sufficient memory.

If this operation failed, the kernel fell back to allocate the bio_vec object from the mempool. However, inside the mempool, the system first tried to execute the pool->alloc callback for allocation. If this allocation failed, the kernel set the process to an uninterruptible state and put the process in a wait queue. After other processes returned memory resources to the mempool or the timer timed out (after 5 seconds), the process scheduler invoked the process for retry. The wait time of the wait queue was consistent with the jitter delay of our application monitoring.

Because we knew that the kmem accounting was unstable in the RHEL 3.10 kernel, we suspected that a kernel bug caused the SLUB allocation failure. We searched for kernel patch information, and found that it was a kernel bug, and that it had been fixed in Linux kernel version 4.x: slub: make dead caches discard free slabs immediately. There was also a namespace leak issue associated with kmem accounting: mm: memcontrol: fix cgroup creation failure after many small jobs.

So how was kmem accounting enabled? We used the opensnoop tool in bcc to monitor the kmem configuration file and captured runc as the file modifier. From the K8s code, we found that kmem accounting was enabled by default in the K8s-dependent runc project.

Based on our issue analysis, we can fix the bug in either of the following ways:

Now runc includes the conditional compilation option, and you can disable kmem accounting via Build Tags. After we disabled this feature, our test result showed that the jitter disappeared, and so did the namespace leak and SLUB allocation failure problems.

We need to disable the kmem accounting feature on both kubelet and Docker.

Related issues in the community:

After the K8s platform ran for a time, the following message was displayed: “Kernel:unregister_netdevice: waiting for eth0 to become free. Usage count = 1”. In addition, multiple processes would be in an uninterruptible state. The only workaround for this problem was to restart the server.

We used the crash tool to analyze vmcore. We found that the netdev_wait_allrefs function blocked the kernel thread, and that the function was in an infinite loop waiting for dev->refcnt to drop to 0. Because the pod had been released, we suspected that this issue was due to a reference count leak. After analyzing K8s issues, we found that the kernel was the crux of the issue, but there was no simple, stable, and reliable method to reproduce the issue. Also, this issue still occurred in the later community version of the kernel.

To avoid restarting the server every time this issue occurred, we developed a kernel module. When the net_device reference count was found to leak, this kernel module would be removed after the reference count was dropped to 0 (to avoid accidentally deleting other NICs that weren’t referenced by the leak). Besides, to avoid manual cleanup, we wrote a monitoring script that periodically automated this operation.

However, this solution had the following defects:

As we prepared to drill down into the callback function logic registered by each subscriber, we also followed up on the progress of kernel patches and RHEL. We found that solutions:3659011 of RHEL had an update that mentioned a patch submitted by the upstream link: route: set the deleted fnhe fnhe_daddr to 0 in ip_del_fnhe to fix a race.

We applied this patch to the kernel as a hotfix and tested for a week. The issue didn’t reappear. We reported our test information to RHEL, and they told us they’d started backporting the patch.

We’ve fixed these kernel bugs expediently. However, there are more effective long-term solutions. For Bug #1, we hope that the K8s community can provide an argument for kubelet to allow users to disable or enable the kmem accounting feature.

For Bug #2, the optimal solution is for RHEL and CentOS to fix the kernel bug. After TiDB users upgrade to a new version of CentOS, they won’t have to worry about this problem.